Posted on September 20, 2011 by raincoastguides

Seeds of the past.

You have all ready heard, and read, that the Elwah dam is coming down for real now, bit by bit, and that although everyone is happy the dam is going, most folks who give a shit about native fish are some where between seriously pissed, and very disappointed that the Elwah tribe plans to start a major hatchery program to (and I am using quotations to indicate sarcasm) “restore” salmon and steelhead runs.
Here is my take. 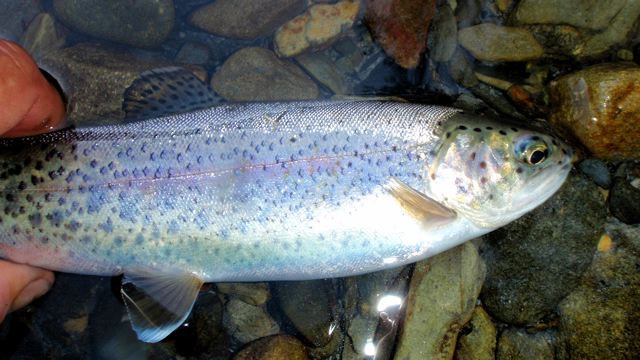 This is the guy. Upper river (above both dams) Elwah river rainhead, or steelbow, or what have you.  If you walk way up the Elwah there are about a jillion of these guys and they are, according to the geeks, genetically identical to the Elwah summer steelhead.  That is to say, in a world where native summer steelhead are pretty much extinct, a healthy, hell, robust population has escaped exploitation and has been hiding away in a sanctuary high in the Olympics. Now the Dams are coming out, and these fish will once again have access to the ocean.  It’s like a chance to go back in time.

If these fish go to sea, and are able to return in strong numbers it will be the greatest triumph in northwest fisheries ever, for real, no shit.  If they go to sea and don’t return it could be a huge step in understanding why the native Puget sound steelhead populations have collapsed.  If we dump a bazillion hatchery smolt in on top of them the hatchery fish will damage and mutate the genetics, interfere with native rearing and basically destroy all chances of discovering anything of use or merit.

Why would the Elwah tribe do this?  Their biologists know better, they are not idiots.  Well here are some thoughts.  Fisheries are big business for the tribes, bigger than you think and becoming more lucrative as they gain control over an ever increasing portion of the west coast sea food market. The northwest tribes as a whole, have in the past expressed a fear that damn removal could become a precedent for hatchery closure. Federally subsidized hatcheries create, in effect, federally subsidized fisheries. Tax payers pay to produce the fish at enormous cost, and commercial fishermen harvest them and sell them back to the tax payers for a profit.

And the Elwah tribe want a fishery, why not?  They used to have one.  The thing is the subsistence fisheries of the past just didn’t operate like the tribal commercial fisheries of today.  I mean if you are just catching fish to eat it doesn’t matter if they are salmon, steelhead, jacks, smolt, or even bull heads.  It’s all protein.  But it matters to the commercial market.  That market needs big bright salmon and steelhead and it needs a large and constant supply to thrive.

In this day an age tribal commercial fisheries in Washington often try to harvest 25% or more of a rivers entire salmon or steelhead run.  This type of harvest might work for a few years, but it will inevitably lead to fisheries collapses.  It is not sustainable without hatcheries, and fisheries biologists from Alaska to California are in agreement that large scale hatchery programs will always harm native runs.

So this is in effect a line in the sand.  Do we let the river recover on its own?  It’s my guess that it will, and much faster than we think, but it will probably never support a large scale commercial fishery.  It will teach us lessons about recovery, about how salmon and steelhead and cutthroat and bull heads and sturgeon and smelt and whitefish and bull trout all recolonize habitat, who comes first, who dominates where, who impacts whom and how.
And it may in time provide a sport fishery and enough salmon to allow the tribe to sell some.
Or do we turn it into a fish factory, like we have so many other rivers, pour money into hatcheries that squash the native runs so we can take out as many fish as possible? 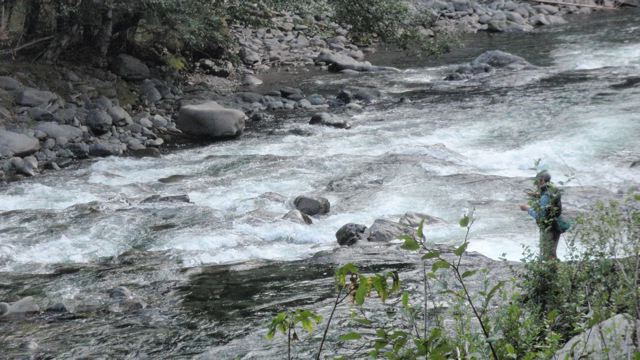 The Wild Steelhead Coalition, The Native Fish Society and others are now suing the national Park for letting the tribes run this hatchery. It is their hope that the Park can stop the tribes.  You can find out more at the Wild Steelhead coalition web site wildsteelheadcoalition.org

I would like to see this river recover, or try to, on its own.  At least for 8 or 10 years.  If the tribes want to run a very small brood stock operation as insurance that they can keep their genetics alive well, that would be a bummer, but much better than the “jump start” idea they are going with now.  If they need a big check every year to make up for lost fisheries or hatchery revenue, I say we give them that too.
The thing about the hatchery is, it will not be too late to start one ten years from now, but we will NEVER get this chance to go back in time again.

« Back to the river
Yep, Fall coho time, full on. »
Blog Navigation