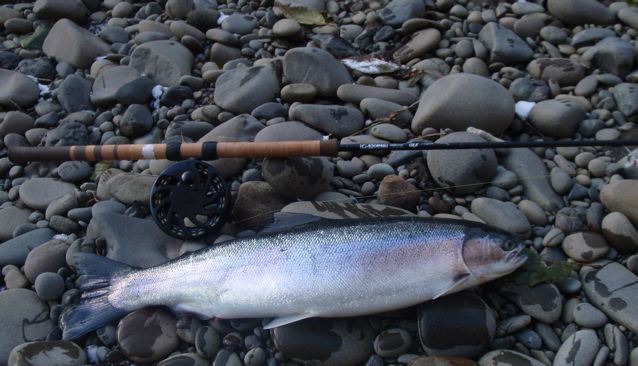 The light in November is so low that the river looks black, but when you look into it the water is as clear as air.

I remember this from when I was a kid, especially on snowy days.

With the blue sky and the tree’s full of snow you might say it’s like drifting through a living painting, if you said that in my boat I would make fun of you all day.

That’s probably why I was fishing alone on Tuesday afternoon.

I have a brand new ceterpin rod and I love it.  When I cast it I have no idea where it will throw my gear, or even if it will go anywhere at all.  When I feel around the reel my hands are blind, they have no memory of what goes where, all the tangles are new and unexpected.

I hooked a fish while drifting and realized that my anchor line was frozen solid, I had about 6 feet of line to work with but I would have to go to the stern and manually throw the anchor over.  My net was frozen to the floor in the bow, once I pried it loose I found the handle was frozen so I could not slide it open.  I held it in the river with my non fish-fighting hand until I could open it, the button that holds the net handle in place was, frozen.  I hit it on the deck until it would move.

I could see the fish clearly in the river, I watched it while I sorted out the boat, finally scooped it up.

The fishing has been every bit as good as it could be, I have December dates open.

« Yep, looks like Tuesday should be cool
Lots of winter steelhead »
Blog Navigation