WTF chuck? Where are my steelhead reports?

Easy, easy.  I hear you.  I have been doing a lot of screwing around in recent weeks with trout and rockfish and smallmouth and other peoples awesome baja reports and you guys want, and deserve a good old fashioned salmon/steelhead report. So hear it is.

The Deschutes has more steelhead in it than we are ever likely to see again in a life time, the Klickitat, John Day, and Salmon will all be there shortly.  I am not going there.

The Puget sound rivers have so many pinks in them if they all jumped at once the river level would drop 2 feet.  I am not going there either.

I am returning to the quiet cool misty rivers of the OP, to fish for the steelhead and salmon that are already there and the trout salmon and steelhead that will be arriving in the coming weeks.

Yes, other than the Hoh and queets  the rivers are bone dry and desperately in need of rain, the Sol Duc is stuffed to the gills (so to speak) with big summer coho, the bogie is warm soup, but the Hoh and Queets are still prime, and the Octber caddis will hatch no matter what. 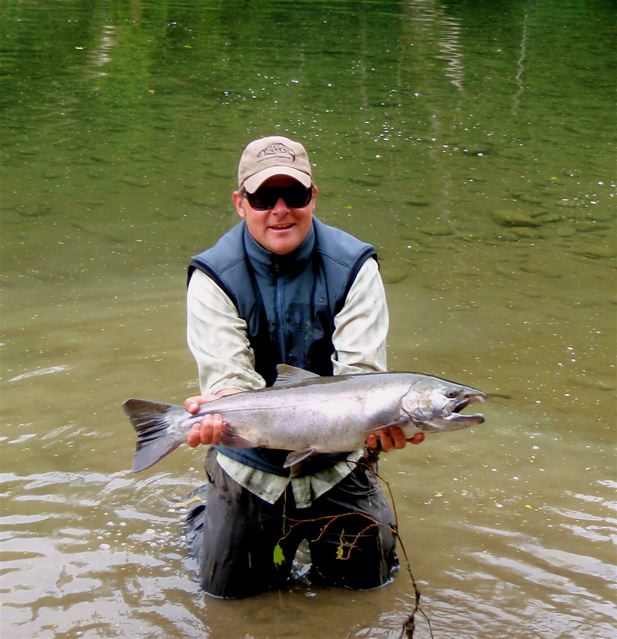 Eric with a nice fat summer Coho from last week, 10 pounds and jumps higher than your head

I am hoping for rain, that said, when it comes I will complain that the beautiful glacial rivers are out.  Right now your best is either stripping flies for kegged up Coho in the Sol Duc.  Or swinging old school in the Hoh or Queets.  The Hoh is putting out summer run steelhead and a mix of summer and fall salmon.