Posted on January 2, 2017 by raincoastguides

First a fish report, and some left over photo’s.

The numbers of hatchery fish have definitely dwindled.  There are some nice wild fish around, but not a bunch.  My last several trips have been slower fishing but a ton of fun.  The numbers of native fish will pick up a bit as we move into January.

This is why I should get a better camera, I love the super cool mid winter light. Thanks for a fun day Jeff (and Rob) 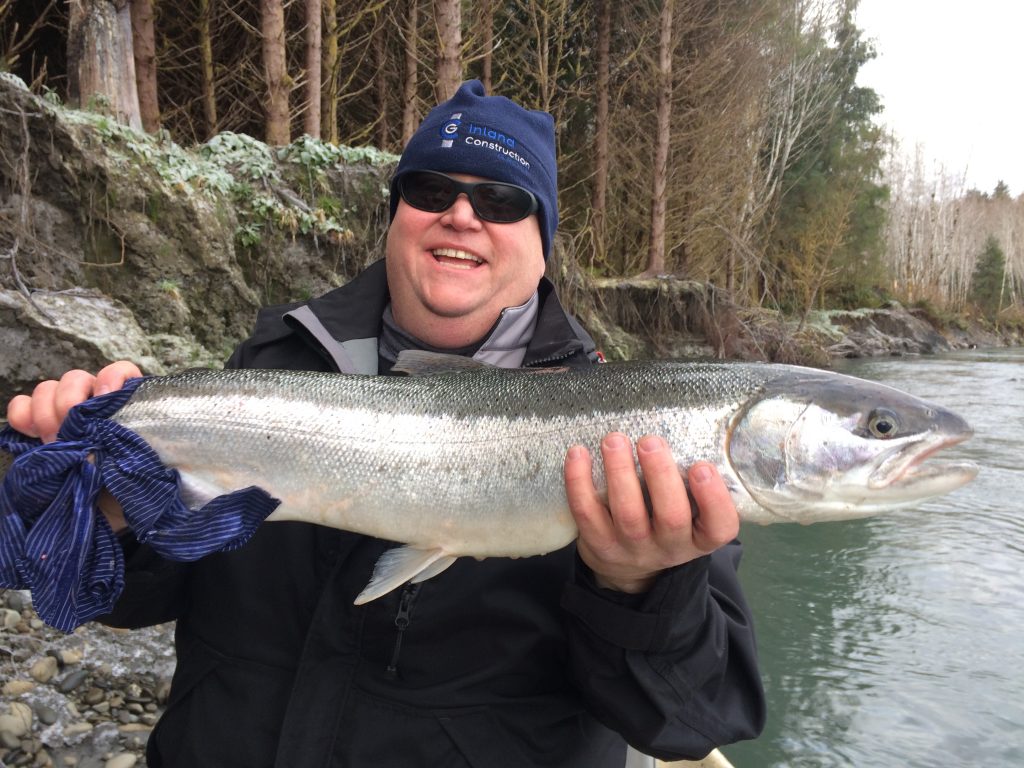 JP with a hatchery hen from the back of the bus

My friend Josh Dickenson long ago shared with me his appreciation for skin mounts, (taxidermied fish made from the real skin)  Specifically old ones.  The kind you see in bars and hardware stores from days gone by.

Skin mounts tell a history of a regions fishing in a way that may have more truth than any other.  You can hear a fish story from long ago, or see an old photograph.  But the fish on the wall is the actual fish, right there, you could touch it.

Fish eye lenses are the opposite end of the truth spectrum.  (Fish eye camera lenses are the really wide angle ones, that make the things right in front of the camera look huge and everything thing else look small.)

Pictures don’t lie, but the fish eye is a tool to stretch the truth as far as technology will allow.

I have used extreme wide angle lenses in fish shots and know as an advertising tool they are very effective.  People react much more to a fish eye shot than they do an image of the same fish in a more natural perspective.  Extreme wide angle shots get more likes and shares, and clients will show them to more of their friends, and their friends will be more impressed, and a guide will get more bookings. But its not the truth.

It’s not a lie, it’s just an exageration.

In my profession being concerned about whats true and whats not may be a bit of a handicap.  But I am, some what regretfully, I blame it on my upbringing.

This is not to cast blame or contempt, as I have said, I do it too, and there is wide angle, and extreme wide angle. There is the intention to be dramatic vrs. the intention to be misleading.  To bring this back to skin mounts, sometimes its fun to just be honest, to try to portray what it’s really like. An accurate representation of the critters that live in the river today, that people can glance back at and say, “Hmmm, so thats what it was like”. They are really cool, we don’t need to try to make them more cool.