Posted on January 1, 2018 by raincoastguides

I had a great and fun year with our fishing guests and with my family.

We had some cool fishing and some amazing days on the river.

I hope you all can make some time to get out and go fishing, maybe take a kid or a friend. 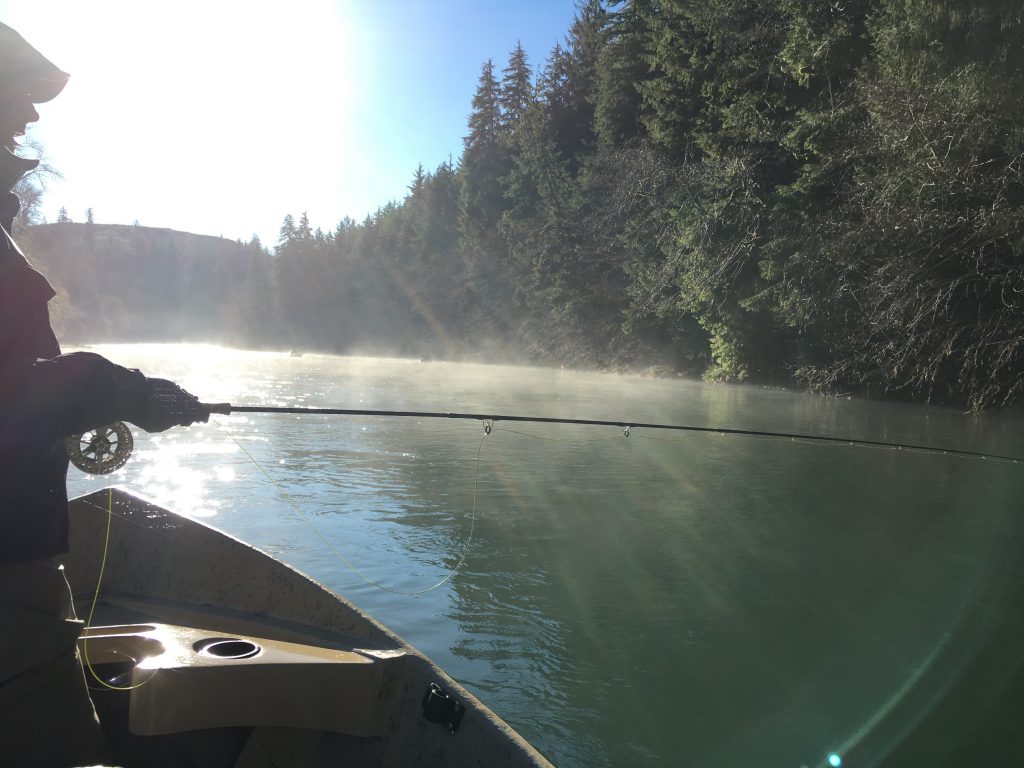 The shortest days of winter are behind us!

I should probably, from a business standpoint, leave it at that.

But I feel its also  important to document at least a few of  the fisheries management mishaps of the last year or so.

Maybe you should stop reading now.

As many of you know, the North Coast of the Olympic Peninsula now allows zero sport harvest of Native steelhead.

That should be  a good thing, but here is the rub.  As predicted by the local guides association, and pretty much everyone who does not have their head up their ass, the Quillayute tribe has claimed the right to harvest the sport share of these fish.

That means, due to the no kill law the total harvest of native steelhead will increase.

Lots of people tried to convince those in favor of this rule change to go to the states attorney general, and MAKE SURE, that if the tribe claimed the right to harvest the sport limit of native steelhead, the AG would have WDFW’s back in any legal dispute.

But all the leaders of sport fishing groups I spoke to said the same thing.  “The tribe doesn’t have the right, they can’t do it, don’t worry”

This is not about an “I told you so”, this is about important folks entrusted with enormous amounts of donated fisheries conservation funds either being really wrong, or lying to their doners.

So, no, nothing will be done about this.

Another concern recently has been that many of there steelhead here are being caught and released numerous times, and that may be impacting their ability to spawn.

Many of methods for reducing this impact have been discussed, but the only one that seemed to have even a prayer politically was a cap on the number of guides using the fishery.

I was a principal backer of this effort, but I was never able to even lift it off the ground. The initially language of the bill was released with serious flaws, and it never recovered.

Lots of people worked very hard on this, and some are still trying from other angles, but here in Forks we were never even able to get a hearing for the actual language we wanted.

At this point its well agreed upon that one of the biggest challenges to maintaining wild steelhead populations on the OP is lack of data.

To this end we have been pushing for better fish counts, red counts, and creel surveys.

This year we presently have no creelers, and the Hoh sonar weir has been turned off.

Poaching, both by sport fishermen, and more concerning, market hunters/fishermen has been on the rise.

Disturbingly last year fisheries enforcement personnel from 2 different agencies told me they suspected organized poachers selling fish through a licensed fish buyer, and that at least some of the poachers were being reimbursed in heroin.

Despite that, WDFW has determined they will remove one of the 2 WDFW officers that are supposed to be in Forks.

I say “supposed to be” because typically, for the last several years both WDFW enforcement positions have been vacant, and we are left with no enforcement at all.

Here is the thing.

I believe the Washington State is mandated through the Boldt decision, if nowhere else, to provide enforcement, to be able to demonstrate accurate harvest numbers, and to have enough data to make in season adjustments when called for.

WDFW is providing none of this on the OP.

Look, as a recap,

Is the Quillayute tribe harvesting a lot more fish now we have a no kill rule?

Who knows, because as mentioned, the data sucks.  But I would guess the no kill rule will only result in a maybe, 2 or 3 hundred more dead native steelhead most years.  Less this year due to poor run predictions.

Was the guide cap really going to save a lot of fish?

No, the intent was to keep things from continuing to mushroom at such an alarming rate, and to begin to get a handle on how much impact this one segment of the sport fishing effort was was having.  So, again, it would have helped, but losing it isn’t going to make a huge difference in the long term health of OP steelhead populations.

How about the lack of data collection?  Whats the net effect there?

Well since most of the data was admittedly crap before, and WDFW often doesn’t pay much attention to it anyway, no, it’s a shame to lose it, but in the end, it won’t be the end of the fishery as we know it.

How about the lack of enforcement?

It would be cool to me if WDFW would decide, maybe at the urging of some big tough NGO, that it should provide the North Coast OP with year round creeling and enforcement and get a biologist on the ground around Forks at least once a week to see how things are going.

It would be cool if as a starting point we could form a coalition that agreed maintaining basic management tools was essential, and not optional.

And for those (like me) who think there easily could, and should be more native salmon and steelhead in the river, maybe we could look longer term to resetting the escapement goals.

I will keep speaking to decision makers, and trying to have an impact, but I will try not to post too much here.

I have some new fishing related projects I would like to start working on, and I will use this space towards that end.

« What are you doing the 2nd through the 8th?$
Longer »
Blog Navigation