Rivers coming in as I am heading out

Well it looks like the rivers will start to be fishable in a
week or so, right about the time I head to Mexico, so your on your own.

Remember, get to the Sol Duc when the Department of ecology
hydrograph reads about 1800  CFS https://fortress.wa.gov/ecy/wrx/wrx/flows/station.asp?sta=20A070
.  Same deal with the Hoh only the
graph is run by the USGS, http://waterdata.usgs.gov/wa/nwis/uv/?12041200
the Bogachiel graph measures in
height, not CFS so you want it to read about 28 feet or less. http://ahps2.wrh.noaa.gov/ahps2/hydrograph.php?wfo=sew&gage=bogw1&view=1,1,1,1,1,1,1,0

Monday through Thursday the Tribal gill nets will be
blocking the river so go up river and fish the holes and the slow tailouts,
Friday through the weekend go as low as you an and fish long shallow riffles
and Pocket water for fish that just got there.

There were quite a few native steelhead in the Sol Duc
before the flood and they should be everywhere by the end of the month, the big
fish move fast this time of the year so head higher up in the systems for pigs.

If you want to book a trip for prime time spring steelhead,
I am about 80%full right now, despite the economy it looks like I will be solid
by the first week of February, if your not on the books yet it’s time to jump.  Oh yea, that bull is in my backyard chewing on the hay bale behind my archery target, its O.K. though, I think his dads horns are on my wall 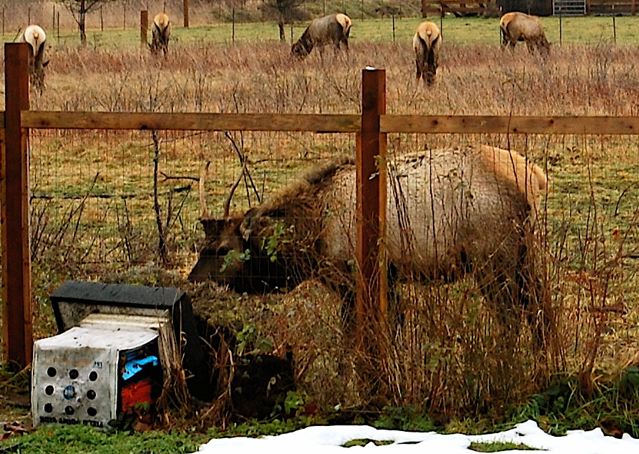 3 Responses to Bull on target

« 20 incher
Donna whats up, why does the text look like crap before I click the “more” button? It doesn’t look like that in preveiw. »
Blog Navigation