We have a winner

WE HAVE A WINNER

Yep I blew it.
One report , It looks like Marty Leask is fishing with me for free. So I
will have to start a new pool shortly, here is a longer than usual entry, read
it slowly, it may be a while before you get another

We did the
thing that seemed to be the most obvious the other day; I guess everyone else
canceled their trips figuring it would blow out. It didn’t we had a drift all
to ourselves and hooked a mess of 9 to 12 pound chromers, just like the old
days…even a blind sow finds an acorn once in a while.  The last three days I have been fishing with a guy who is
truly dedicated to learning to spey fish winter steelhead.  He learned a bunch of stuff and I
learned something too.  He learned
that winter runs can be crazy hard to catch on the swing, I learned that I
still get buck fever when I feel a steelhead start to eat my swing fly. 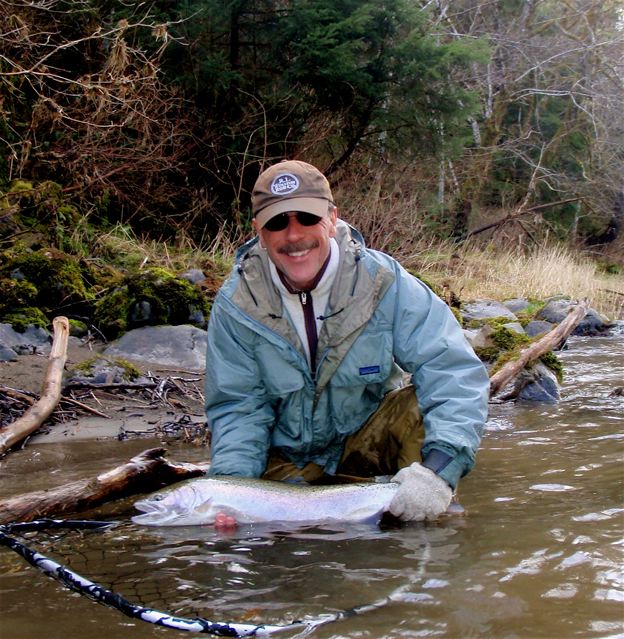 Mike with a lower river buck

We were fishing the upper Sol Duc, the low water would let
us fish lighter tips up there, which are of course a lot easier to cast.  I was fishing behind my client and was
thinking how I just don’t get excited about upriver winter fish anymore. After
a couple weeks of fishing close enough to the ocean to smell the salt and
hooking those absolutely explosive chromers, the thought of hunting the upper
river for two to three week old fish had me feeling a little, well, un-jazzed,
if that’s a word.

Not that many years ago ANY steelhead that ate a swung fly
was awesome, how had I become picky?
And then I felt the lightest increase in tension through the line, then
it was gone, then it was back, then gone and as it started to come tight a
third time, and I mean we are talking about a really light pull, like less than
a leaf hanging on your fly, but as it started to pull the third time a totally
unbidden thought shot through all the mental clutter to the fore front of my
mind, like a giant neon sign flashing two words, IT’S HAPPENING.

So there you go, three vague and mossy fumbles up my line
and my adrenal glands switch to full dump.  So much for being over up river fish.

It  was a big
strong fish, I landed it after a long time of pulling to the breaking point of
heavy tippet, it had a big dull red stripe down its side and a few scars.

3 Responses to We have a winner