Still slugging it out with springers

Swinging flies for winter fish can be difficult. What follows is an explanation of what I see as some the chief obstacles to success.

Seeing chrome bright winter steelhead, even in very clear water can be ridiculously difficult.  When I was first learning to catch steelhead on flys my friends and I would go to the mouth of the Elwah just above tide water and wait for small schools of fish to slide up into the riffles and flats.  Standing in the river they were impossible to see, but standing on a high gravel bank you could just barely see the ghostly green lines hovering above the bottom. 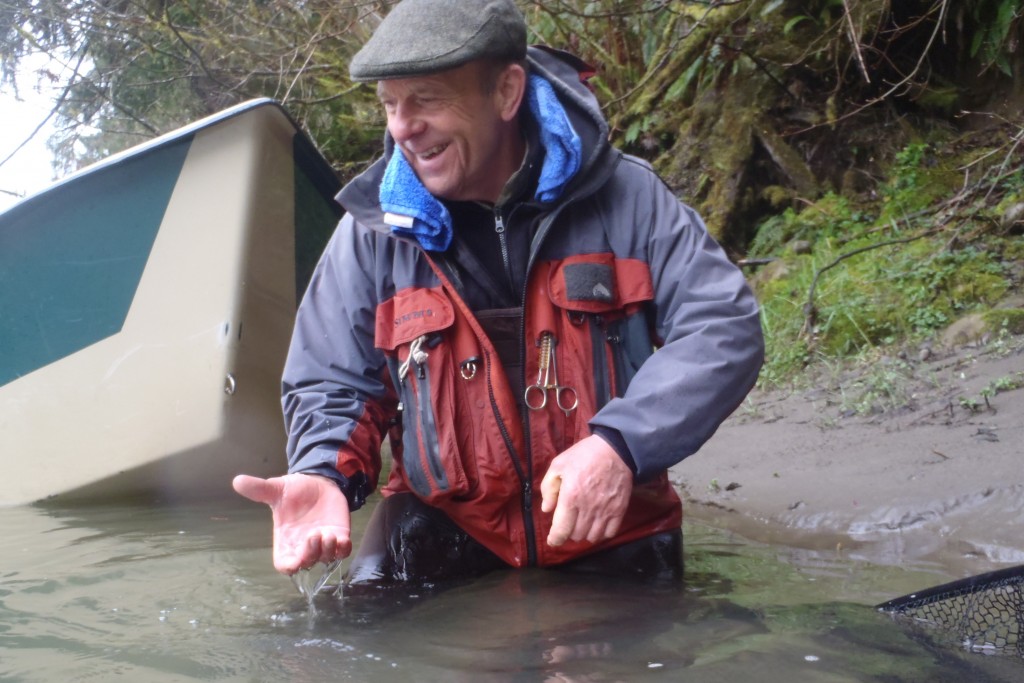 John with an invisible steelhead.

On the good days the fish would enter the river, blow through the lower flats in one big push, make a brief stop in the first deep hole, and then casually slide up the next riffle and settle on the shallow side of a deep fast gut under the cover of a light chop.  The key, and surprise to us at the time, was that they would move to the shallow side.

Here is what we saw, fishing as a team, one spotter, one angler.  If a small fly was fished perfectly these fish they would almost always move to it on the first cast.  If the first cast or two were not deep enough, or if the fly dragged badly the fish would never become interested.

“Perfect” in this case was what I often think of as the “up and away“ presentation. The fish gets to see the fly out of both eyes, that is the fly is cast to the far side of the fish and allowed to swing towards, and then away from the fish as it passes him.  More importantly, the fly starts very deeply, and rises as it swings.  In an absolutely perfect shot the fly would begin to swing towards the fish, and then at a range of about two feet from his head it would go under full tension and begin to turn the corner all at once.  It would begin to rise up just as it passed his head and then swing away from the fish on his far side, moving laterally across the current but no longer dropping down stream at all.

If the fly started at the fishes level, approached his head at that level, and then rose up and away one to thee feet in front of his nose he would follow it like he was attached magnetically, generally for about 8 to 14 feet, and then EAT IT!

On a less than perfect cast, or with a less aggressive fish, the interest level would be more casual by degrees.  From a causal rocking an inch or two in the direction of the fly, to a short (one to six foot) furtive and uncertain purist of the fly punctuated throughout by tiny imperceptible nips.

These nips later became another key to success in catching these fish.

As for the last few days, I did see some really nice fresh winter run steelhead coming in the river, but the springers slowed to a trickle, I hope some came in last night because I am on my way out the door right now.

3 Responses to Still slugging it out with springers