Posted on November 13, 2015 by raincoastguides

As almost every steelhead angler in the country knows, the Washington State fish and Wildlife Commission will be taking comment concerning a list of sport fishing regulation changes on the Olympic Peninsula.

These proposals were designed by a ad hoc advisory board selected by fish and wildlife.

I have stayed abreast of this process from day one, speaking weekly to many members of the group, as well as fish and wild life employee’s and members of other steelhead advocacy groups.

In the end, much of my time was spent fact checking, writing, and rewriting, and trying to determine how  or if any of these recommendations would work as intended.

Here is what I believe about the primary recommendations.

No Kill on Wild Steelhead.

I think this rule will reduce the number of wild steelhead harvested.

I had some concern that this rule might lead the tribes to increase their harvest, and negate any conservation gain.  But after doing a lot of research I do not think this will be the case.  This rule will lead to a small, but significant, decrease in harvest.  We could use the help. 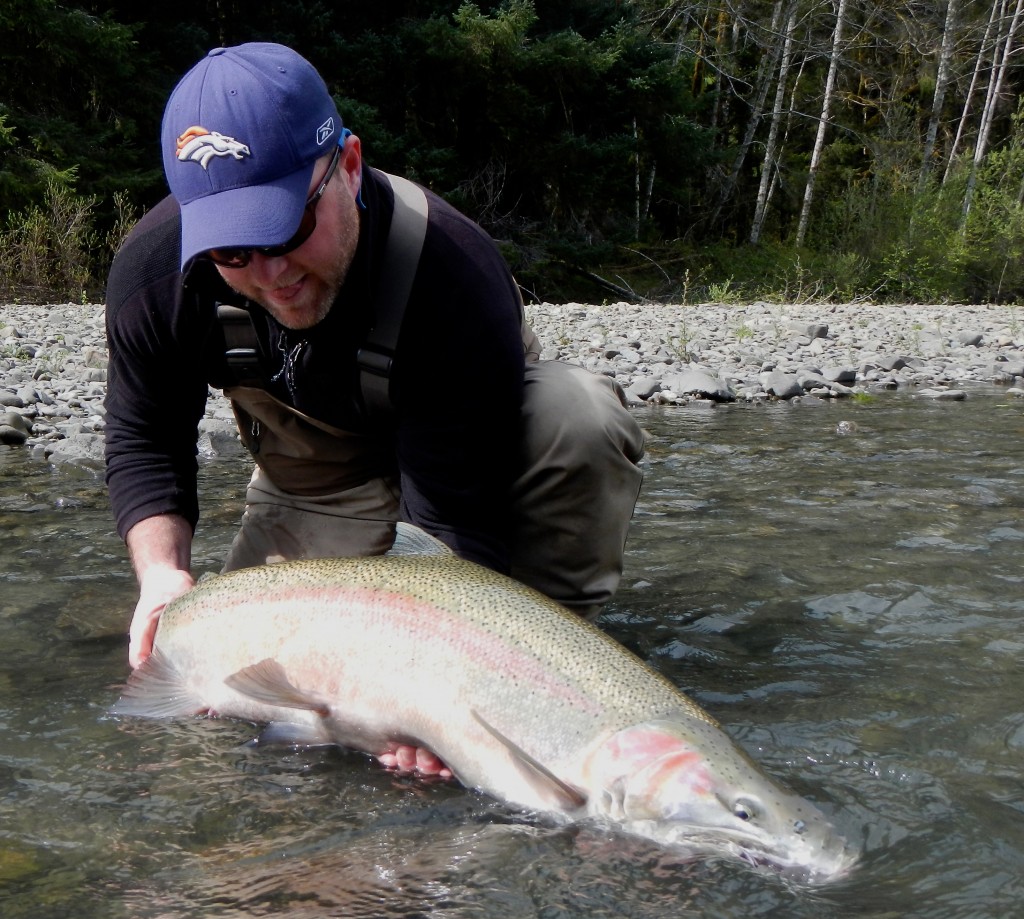 If we have to talk a little longer, work a little harder, to keep fish like this around, its worth it.

No fishing from boats.

This is no fishing from a boat on the Upper Hoh above Morgans.

The question is why?

If it is to reduce encounters on native steelhead while still maintaining angler opportunity then its probably a good idea.

If we are talking about doing a season or more of creeling to determine how much use the area is getting, and how many fish are being encountered so we have a base line, thats very good news.

Then when we go to no fishing from a boat we can put a number on exactly how much impact this rule has.

This is crucially important because when we have conversations with co-managers about needed harvest cutbacks, we can demonstrate the effectiveness of this tool, and say things like “if you guys reduce your net days by 6 hours we will increase our no boat area by 2 miles” And perhaps avoid fisheries closures like we have seen on the Hoh in the summer.

The problem is if we just implement these rules with no base line data, we will never know if it really helped, or how much.

And we can’t use it as a tool, or use it to guide the creation of future no fishing from boat areas.

So, without the data, what is it?

This seems to me to be by far the most contentious issue.  And an issue that most needed more time and data to resolve.

I do not use bait for native steelhead.  But many guides do.

However you feel about the issue you must recognize that “fisheries management” is really about managing people.

Dozens of local business owners feel that this rule will have a negative impact on their businesses.  These are people who support  families, and pay mortgages.

If they fear that this rule will take money out of their pockets, and endanger their livelihood, then time should be taken to demonstrate the positive impacts this rule may have, and look at ways to insulate their businesses from harm.

In short their concerns should be taken seriously by EVERYONE involved, and creative solutions should be sought.

Segments of the conservation community have displayed open disdain for other user groups.  If these rule changes fail, it will be largely their fault.  They have created the resistance they are now fighting against.

We all need to invest the time to get this right, so we can create change that works and will be supported by the State.

So now its Maximum sustained harvest vrs a potential no harvest rule.

Washington has chosen to manage its fisheries through MSH.

What that means is we set spawning goals for each river system and then try to harvest every “extra” fish that returns after that goal has been reached.  That is the law of the land, the single rule that governs every major rule the department of fish and game makes.

According to Washington department of fish and Wildlife there are lots of “extra” native steelhead on the Olympic peninsula.

So how does it work when a no kill rule passes?  MSH, and no kill on native steelhead are directly opposed to one another.

The department of fish and wildlife will be forced to fail at one of these goals.

Can we say we are operating on a MSH model if we are not harvesting fish?

If we are not, what model are we using?

I’ll be glad to pick one.

Its tempting to spend about 5 pages highlighting how screwed up advisory board process was.  But its also important to point out that this was a unique effort on the part of the state to gather information and include the public. And that effort should be applauded.

The state underestimated the time this would take, and badly rushed the process.  Due to the make up of the group things quickly reached an impasse, and the State appointed a manager to facilitate the discussion instead of a moderator.

Despite all sides being relatively close to agreement going in the door, no consensus was reached, and much of the sport fishing community was divided on the end result.

Communication was so bad that several people involved have speculated that it was the the Department of fish and wildlife’s intention to sabotage the process so as not to be bound by decisions made by the commission.

How ever it works out, we will not be at an end point, but just a little bit down the rd to better native steelhead management.

Groups like Steel Headers United are going to have a lot of work to do reuniting steel headers. Wild Steelhead Coalition has to build broader coalitions.  We have to work together on this stuff if we want to maintain one of the best steelhead fisheries in the world.

4 Responses to Rule Change Proposals, the status Quo is unacceptable