The roots of it go way deeper than WDFW or The Hoh tribe.  The idea that salmon and steelhead runs could or should be managed under the MSY model the state has been dragging around for years is a complete farce.

Second, there are some great guys at WDFW trying to make this broken system work.  And I don’t blame the Hoh tribe here at all.  They don’t deal with the state, and I wouldn’t either in their shoes, the state is all screwed up here, their data sucks (proposed closure is based on punch cards from 2007) and they have no real working knowledge of how anyone, tribe or sport, is using the river.

Here is the deal.  WDFW is apparently deciding NOT to open the Hoh river at all this spring or early summer to sport fishing.

The Olympic Peninsula Guides Association, and many others have been urging the state to take action for years to help preserve this run to allow continued sport fishing.

By and large the response we got from WDFW was that either that the fish were fine, or, there was nothing they could or would change about the sport fishery unless the Hoh tribe also made significant changes.

When we suggested season changes or going to selective gear we were told that this would “place an undue portion of the conservation burden on sport fishermen”.

In other words, if the tribe won’t cut back, we won’t.

This year we saw a complete about face.  At North of Falcon the state implied that it would not be opening the Hoh at all, and when asked for specifics as to terms, they would only say “Tell us why we should?”.

At the same meeting a state WDFW representative twice laughed out loud at questions asked about summer fishing on the Hoh and would offer no information about what the states plan for the river might be.

Later, Mike Gross of WDFW was kind enough to offer some insight into this position.

He explained that some folks at wdfw believed that if they shut the sports fishermen out completely they could then force the tribe to cut back on summer kings or take legal action if they did not.

Shockingly it turned out the Hoh tribe did not give a shit what the state said, and they sure as hell were not scared off by the empty threat of legal action. They called the states bluff in a grand fashion.

Before we got to North of Falcon the Hoh tribe had let us know their proposed net schedule was. And it did not change significantly after they heard about the “sport fishing closure”.

Additionally the tribe is not responding, or even speaking to WDFW at all.  They are going about their business the way they see fit.

So sport fishermen will be off the river at least until August 1.  The tribes will have both Ceremonial and commercial openings as of May 1.

There are a couple silver linings here.  The state will finally go to selective gear at least for the summer.

That’s super cool, it will save a few summer kings, but also be a huge boon to native summer steelhead and cutthroat.

And all of a sudden WDFW seems genuinely interested in the data the guides association has been collecting.

Here is the rub.  This was an effort to use sport fishermen, and the business that cater to them, as a political tool.  WDFW made it clear that if people lost jobs, if people lost access to steelhead and trout fisheries that are in good shape, that’s fine, as long as it leads to political gains against their co-manager/adversaries the tribes.  Even, if in the end, it did not lead to real recoveries in fish stocks.

The goal here was not protecting summer kings (WDFW biologists have stated that a complete sport and tribal shutdown would likely not recover the summer king run, as it is believed that the bulk of the over harvest is happening at sea.) The goal was to force the Hoh tribe to the negotiating table, this did not happen.

So whats the take away?

Thousands of people drive all the way out to Forks every year to fish these rivers, at this point, with the current bag limits, none of them are coming here for the promise of Maximum Harvest.  The maximum sustained yield model no longer serves the state of Washington, we want, and deserve, something better.

We want diverse and healthy ecosystems that support a wide variety of healthy runs and native fish.  If we want that, we have to manage for that.  Washington’s MSY model works against this by measuring a rivers value only by how many pounds of salmon meat it can produce a year. 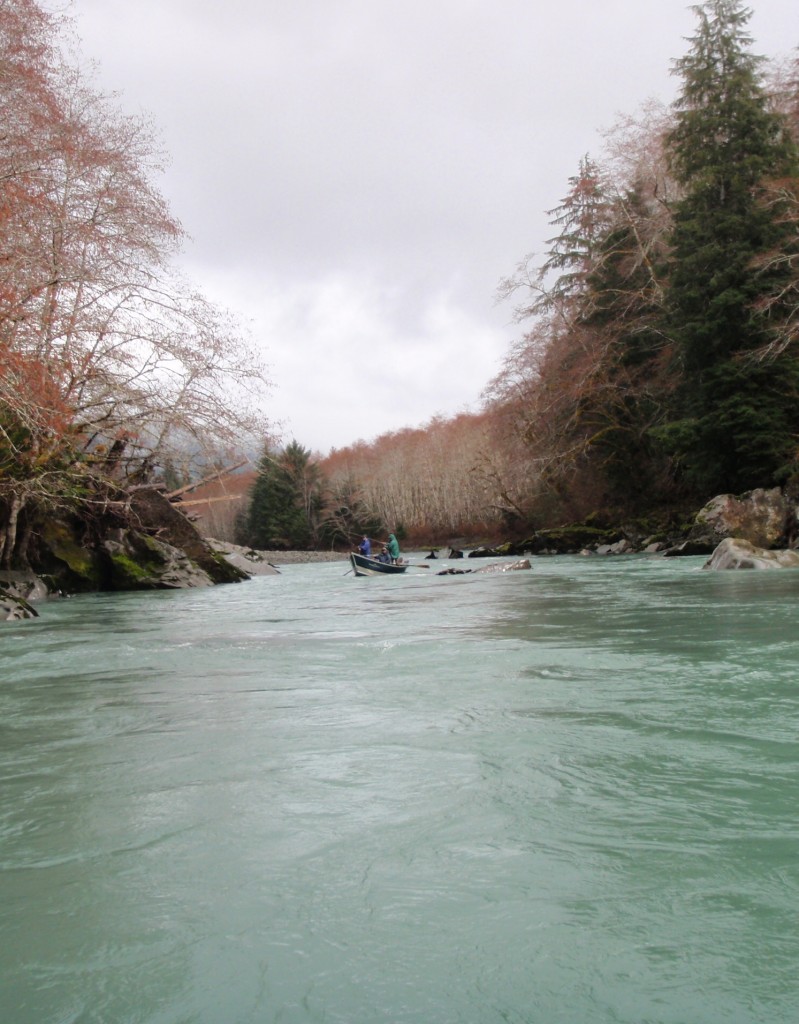 The fish are managing, the managers are struggling

5 Responses to No Hoh?