A friend of mine just returned from Baja, although
temperatures reached over 900 degrees they still managed to have fun.  Nothing too exciting, just jumbo
Dorado, sailfish and tuna going ballistic in flat calm sea’s.  Kinda like here. Except here it’s a little
cooler. 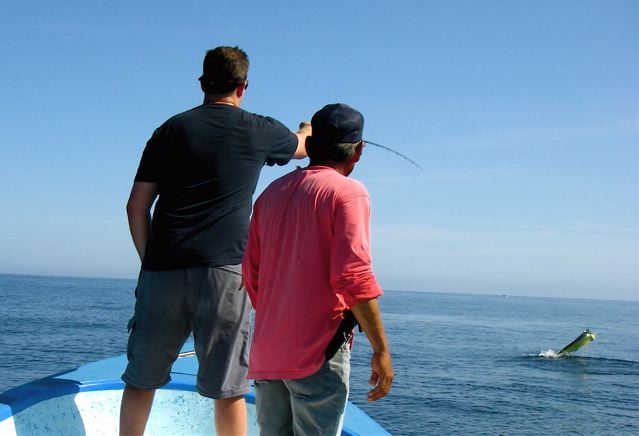 Dylan battles the heat, and a huge dorito

I only have
about ten days of October booked so far, but e-mails are starting to roll in, So
here is the skinny.  From the last
two weeks of September through the fist two weeks of October we should have
good mixed bag fishing for summer and early fall coho, summer steelhead and sea
run cutthroat, along with a few fall kings and the occasional sockeye.

This is the real deal, kick back, swinging dry lines or
light tips, some dry fly fishing, beautiful weather, no crowds, can’t believe
how cool it is Northwest fly fishing experience.  For those who book early I will throw in a shore lunch and a
early bird booking discount. (Book before August 15)

Fall fishing on the Hoh

Now, for those who want to be in the thick of things, from
the second week of October through the end of November its salmonsauresrex
time.  The fly fishing is good but
if you want to really rail some fish for the freezer and the smoker this is one
of those time of year when I say screw it, grab a gear rod and lets load up.

The last several years the last two weeks of November have
been far and away the best.

I will have tons more news about this in the coming weeks.

Right now the summer steelhead scene is hot and dusty, a little
rain would go a long way.