Better management on the Hoh

Posted on September 19, 2015 by raincoastguides

The Hoh River’s iconic summer king salmon run has been in steep decline now for many years. The last two years our spring fishery, and this year most of our summer fishery, had to be closed to protect these fish.

There are many theories about what has caused this decline, but lack of action and finger pointing have to be at the top of the list.

Over the years, sport fishermen claimed that overfishing by the Hoh tribe has been the main cause, and surely, seeing the lower river laced with nets while jet boats raced up and down to scare fish into them made the claim seem plausible.

Some from the Hoh tribe pointed the blame right back at sport fishermen and, in fact, sport fishermen have killed a lot of these fish. The state left limits high long after they clearly should have been reduced, and allowed non-selective gear use over fish stocks that were in poor shape. 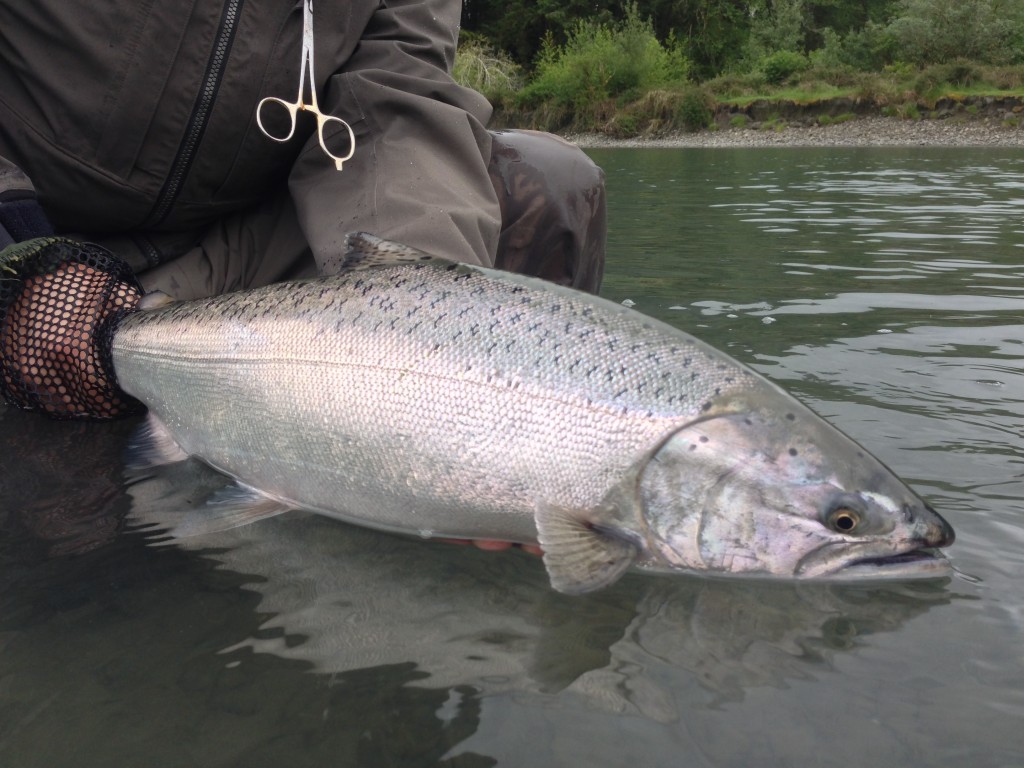 not long ago summer kings were common on the Hoh

Many at the Washington Department of Fish and Wildlife (WDFW) laid the blame at the feet of commercial fishermen in the ocean, who harvested these fish at sea mixed in with thousands of others with no idea where they were bound.

What is clear, however, is that even when the population was in free fall for many years, no decisive action was taken by (WDFW) even though many sport fishermen and others in the sport fishing industry begged the state to reduce the sport harvest.

In the end, the biggest problem was that the state was unable to build a working relationship with the Hoh tribe. They should have been working independently on conservation; instead, they were locked in a stalemate with the tribe over who should take what action.  This lasted for years and, as a result, nothing was done.

But this year the state seems to be getting an inkling of how to create sport fishing opportunity while protecting weak fish stocks.  This has provided a glimmer of hope to West End businesses that count on recreational fishing dollars.
One of the most important changes is the state’s use of adaptive management.  In the past, rules were set in the spring and then, regardless of what took place all year, the managers stuck to them.
Often, even when it became obvious to everyone that the rules would lead to overfishing, the attitude was “Oh well, we will try again next year.”
Recently the state seems more willing to turn on a dime to adapt to current situations.  This year, after sacrificing 75 days of the sport fishing season to protect summer king salmon in the Hoh, the state was scheduled to open the river to harvest even while many of these fish remained vulnerable in the lower river.  This meant that the 75 day closure might have amounted to no gain.

But WDFW made the change and closed the river to sport harvest of king salmon an additional 30 days until October 1, while leaving it open to Coho and hatchery steelhead.
This type of quick, adaptive management allows sport fishing to continue on healthy runs while protecting obviously vulnerable ones or those in decline. It should be the model for the future.
Jim Kerr

« Dry Fly fishing for summer steelhead on the Olympic Peninsula
Fall Coho, how to »
Blog Navigation